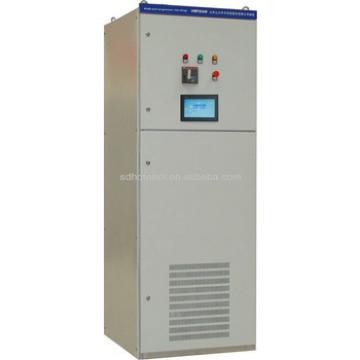 For the load center, dut to large capacity and no large reactive power as support, it is easy to cause grid voltage on the low side and voltage collapse accident. While SVG has fast reactive power adjustment ability, it can maintain load side voltage, to improve voltage stability of power supply system at load side.

A variety of loads in electricity system such as asynchronous motors,electric arc furnance,rolling mill and large capacity rectifying equipment and so on will need a large number of reactive power during working;at the same time, transformer and line impedance in the power distribution grid will also generate some reactive power, that will reduce the system power factor.

The voltage fluctuation and flicker are mainly caused by load dramatic change. This change will cause current sharp fluctuation, cause the electric power grid voltage flicker. The typical loads that cause voltage flicker have electric arc furnace,rolling mill,electric locomotive and so on.

At present, the best equipment to suppress voltage fluctuation and flicker is SVG.

There are a large number of non-linear loads in power distribution grid such as inverter,internal mixer,elevator and arc furnance. They cause grid has a lot of harmoni,voltage/current waveform distortation, electrical equipment fault rate increase, distribution system loss increase, and even happen grid resonance which lead to trip accident. HTSVG can generate equivalent and reverse compensation current to filter harmonic, the maximum compensation capacity is 30% of device capacity.

Traditional SVC response time: ≥20ms(if too fast, may cause oscillation of  reactor and capacitor).

SVG can complete interconversion from rated capacitive reactive power to rated inductive power within a very short time, this incomparable response speed completely can be competent to the impact load compensation.

The output current of SVG is not depend on the voltage, performed as the characteristics of constant current source, can work among the ranges of rated inductive to rated capacitive, has wider operating range. While the nature of SVC is impedance compensation, the output current and voltage have linear relation. So when system voltage reduces, SVG can proved greater compensation capacity compared with the same capacity SVC, the characteristic of voltage and current are as follows,   (4)diversified compensation function

HTSVG not only has fast reactive power compensation functions, but also can compensate load harmonic current, negative-sequence current and other power quality problems based on user actual requirement.